Photos that Changed the World

Peter Stepan Oct 23, 2021 Peter Stepan
Now available in an updated and revised edition, Photos that Changed the World gathers together images of pivotal moments in world history in one stunning volume. In lavish two-page spreads, this book presents nearly one hundred of history’s most memorable photographs — from the Wright Brothers’ first flight to the bombing of Pearl Harbor, from Martin Luther King’s "I Have a Dream" speech to Nelson Mandela’s release from prison, and from the inauguration of President Barack Obama to the Syrian refugee crisis. The volume features pictures from photography masters such as Lewis Hine, Dorothea Lange, Yousuf Karsh, Diane Arbus, and James Nachtwey, as well as iconic images from lesser-known and unknown photojournalists. Photos that Changed the World has been updated to include indelible images of the most significant recent events. Engaging essays accompany each photograph and tell the story behind each image. 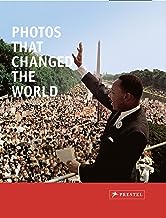